O.H.M.S.S by THE AUTOBAHN OF LIFE


and here's a little featurette


and here is the theme tune, as covered by The Autobahn of Life

Email ThisBlogThis!Share to TwitterShare to FacebookShare to Pinterest
Labels: 007, a girl and a gun, album, Cecilia lund, download, free, ohmss, on her majesty's secret service, Patrick ralla, soundtrack, the autobahn of life

DO YOU KNOW HOW CHRISTMAS TREES ARE GROWN by CECILIA LUND

The second release from Cecilia Lund is a cover of the under represented Bond theme - Do You Know How Christmas Trees Are Grown?. It’s a must for fans of glacial Swedish poptronica.

The sixth James Bond film, On Her Majesty’s Secret Service, was released 50 years ago (on 18th Dec 1969). It was George Lazenby’s only stab at the role, and had a very different fell to the previous Sean Connery films. The film follows the plot of the 1963 book very closely, there aren’t the familiar gadgets, and it didn’t have a typical James Bond Theme, instead having an instrumental main theme, and two recurring tunes throughout the film – Louis Armstrong’s "We Have All the Time in the World" and a John Barry / Hal David song entitled "Do You Know How Christmas Trees Are Grown?" performed by Danish singer Nina.

"I have to stick my oar in the musical area double strong to make the audience try and forget they don't have Sean ... to be Bondian beyond Bondian." – John Barry

wiaiwya, a London based record label, has set itself the task of releasing a never ending James Bond covers album, called A Girl And A Gun (the phrase 'all you need to make a movie is a girl and a gun' is attributed to Jean-Luc Godard) – as every new Bond film is released, a new batch of specially recorded cover versions will be added to the track listing. Among the 40-odd tracks already on the album are Darren Hayman’s Goldfinger, The Left Outsides’ Diamonds Are Forever and Ed Dowie’s chapel organ take on the Bond Theme.

oh, and there's some other James Bond news today too - the first trailer for No Time To Die

Email ThisBlogThis!Share to TwitterShare to FacebookShare to Pinterest
Labels: 007, a girl and a gun, album, Cecilia lund, Christmas, do you know how Christmas trees are grown, download, james bond, music, no time to die, ohmss, wiaiwya

DO YOU KNOW HOW CHRISTMAS TREES ARE GROWN by NINA

it's wintery and from the Morecombe and Wise show

Email ThisBlogThis!Share to TwitterShare to FacebookShare to Pinterest
Labels: 007, a girl and a gun, do you know how Christmas trees are made, nina, ohms

Email ThisBlogThis!Share to TwitterShare to FacebookShare to Pinterest
Labels: a girl and a gun, album, download, dr who, james bond, music, spyfall, wiaiwya

NO TIME TO DIE teaser trailer

Email ThisBlogThis!Share to TwitterShare to FacebookShare to Pinterest
Labels: a girl and a gun, james bond, no time to die, teaser, wiaiwya

No Time To Die poster 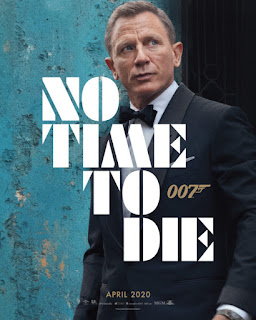 Email ThisBlogThis!Share to TwitterShare to FacebookShare to Pinterest
Labels: 007, a girl and a gun, album, james bond, no time to die, wiaiwya

those nice chaps at Radiohead done gave us a Christmas present, and some clever fellow down a Q division put it together with the SPECTRE opening credits